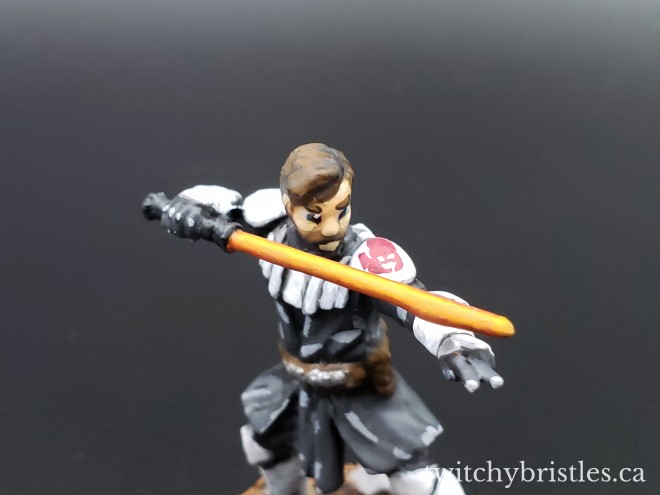 Oh, boy. I still definitely need to work on faces. The good news is that I did manage to make more detailed eyes than I usually pull off, the bad news is that the end result was much more “anime” than I had anticipated. That being said, I’m pretty happy with the end result on this model and if all goes well it’ll be the start to a small Star Wars: Legion army. I doubt I’ll get into playing the game or doing battle reports for it, but…with how brilliantly the Clone Wars series turned out, I feel like it would be a shame not to paint a few of these.

Now, even though this is the General Kenobi model, I actually used this to represent a character of mine from a Star Wars role-playing group that me and some friends have had on the go over the course of the last year-ish. This orange-lightsaber-wielding Jedi Sentinel is Drake Erasmus Hyde, who went from secluded conspiracy theorist to reluctant General to full-time dad and mentor by the time that Order 66 rolled around. Currently he and his ragtag family are planet-to-planet on the run from the Empire. The Kenobi model, I should note, represents the character during his glory days – Hyde looks nowhere near this cool now.

All in all, I’m pretty happy with how this model turned out. I wish however that I’d waited and started with a “troop” unit before moving onto a more detailed character. With that being said, I might have to pick him up a Hyde-themed crack team of clone commandos in the future to represent this character’s glory days during the Ryloth campaign.