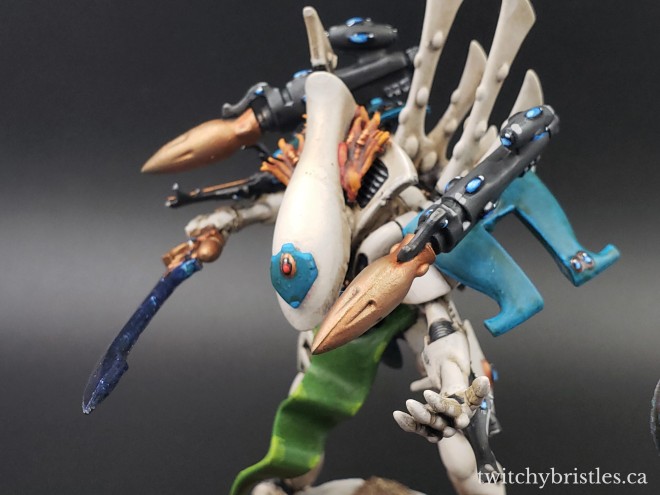 If this counts as a “Fembruary” challenge entry, it does so only on the technicality that the Howling Banshees are a female aspect of Kaela Mensha Khaine, the shattered war god of the Eldar. (But I kind of hope it still counts!) I always liked the idea of painting up Wraith constructs to match or integrate with their old lives or old squads, and my last attempt at painting a Banshee Wraithlord (Big Sister) turned out pretty good, so I thought I’d give this another shot. What made this challenging – but also incredibly rewarding – is that this was a rescue model that was in particularly hard shape when I got started.

The second-hand lot I got this Wraithlord (and a bunch of my other rescue models in) were gorilla glued to themselves and to each other at strange angles, and the Wraithlord was pretty much standing up with its arms tight to its sides and its legs together, almost at attention. While it wasn’t as arduous a rebuild as the Wave Serpent, I had to basically either cut off or break off every limb and reshape/mold/kitbash pieces to get this into a good pose. I tacked a couple heavy weapon shields from my Guardians onto the shoulders to give it a little more armor and bulk, and gave it a luxurious mane of 100% real, donated dwarf beards. No joke.

Out of the Wraithlords I’ve got right now I can safely say that this is the most dynamic-looking out of them, and I’m glad that the rebuild/rescue on this had such good results. Big Sister is still hard to beat for me because I love the “classic” Wraithlord look, but I think this still turned out pretty great. I might go back at some point and change the basing – the fallen Aggressor looks pretty neat, but I think I could put this onto a base that would match the rest of the Howling Banshees I have kicking around as well.

I joke that everything Eldar on this blog comes back to Howling Banshees, and…it really does, doesn’t it? I’ve picked a lane and I’m content to stay in it. That said, with plenty of on-foot Banshees, Jain Zar, and now a Banshee Wraithlord, I might start to try and build up something else in my Eldar army, something that will work complementary to them and make them a force to be reckoned with on the tabletop. (I say that, but I give it about a month before I decide I’m going to build a Banshee Wraithknight.)