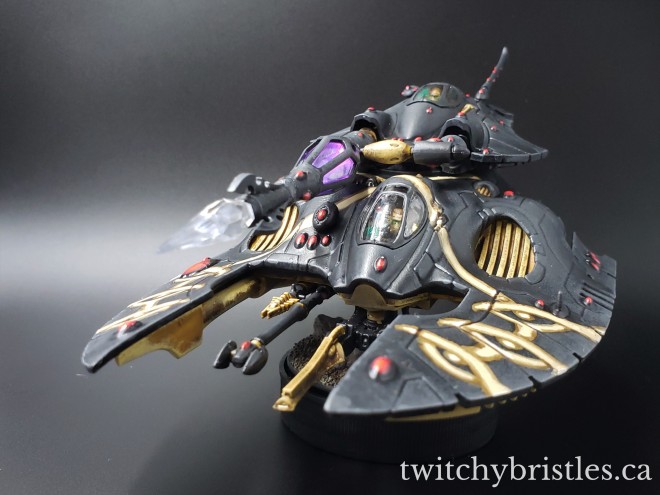 Putting this together was definitely the trickiest build I’ve ever done. Having to drill holes into the frame of the model and run wires between the power supply in the base and to each of the model’s assemblies took planning, elbow grease, and a little luck, but when it came to rigging up the lights themselves Evan Designs and their LEDs were fantastic. Even without having worked with electronics at much length before I was able to figure it out, patch it together, and bring this boat to life.

The final tank ended up being built in a number of subassemblies, either pressure fit or magnetized together so that I can fix it later if any of the lights shut down. I used a take on the “sponge” method I’ve used to do grav tank hulls before and that I used prominently on my Death Guard (and Spekd has my eternal gratitude for introducing me to that.) The hull design is a cross between the “eye” motif Ulthwe uses generally, but is also a callback to the game Fire Emblem: Awakening. Because I’m hot trash.

In addition to the color-changing rainbow cannon and the flickering engine lights, the Fire Prism is also multipurpose – for a while now, my existing Falcon has been in Biel-Tan colors and since I’m going full-Ulthwe I wanted my Howling Banshees to have a party bus that would fit in with the rest of my army. As KinpatsuSamurai has pointed out, I have picked a lane, and I’m owning that!

As tricky as the build was, and as much as I might have been able to give it more love if I’d waited until after my Masters’ was done, I’m extremely happy with the results on this. This is the best model that I have ever built and painted, and the difference between this and my older work (before Twitchy Bristles) is night and day. I don’t think I could hope to end the construction and painting of my Eldar army on a better note.

One thought on “Eldar Fire Prism”