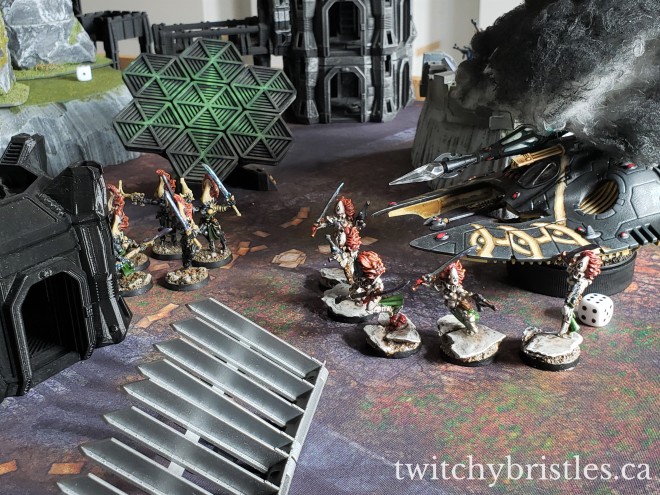 The bad news with writing a Masters’ draft the last month is I did very little painting. The good news is that I got a couple of great games in, playing at Noble Miniatures with KinpatsuSamurai and playing Floorhammer at my apartment with my roommate. In both games I ran my Craftworld Ulthwe Eldar, with wildly varying results. They still hold their own decently against the Sisters of Battle, but I am in desperate need of a solution to to army’s kryptonite – Tyranids.

Both games were in the Crusade format, and the first involved getting my Warlord – in this case Jain Zar – to cast a ritual using the Webway Gate, which we busted out because it fit the mission type and…I will take absolutely any excuse to use my Webway Gate. I sorely underestimated the amount of damage KinpatsuSamurai’s Exorcist could put out, and I paid dearly for it in the first turn of the game. My Banshees took a beating from Repentia Sisters and other close-combat units, but I think what really shone this game were my Storm Guardians. They’re really starting to grow on me.

I managed to just barely win out through time and technicality against KinpatsuSamurai. My roommate is a different story. With her Tyranids, it’s never a question of whether or not I’m going to win, it’s a question of how long the game go on until she tables me and has her run of my objectives! The Banshees probably did best out of my units in this game, but that’s not saying much – we got halfway through turn three when I was wiped off the board. One of these days I’ll figure out how to hold my own against Tyranids – but today is not that day, and tomorrow doesn’t look good either.