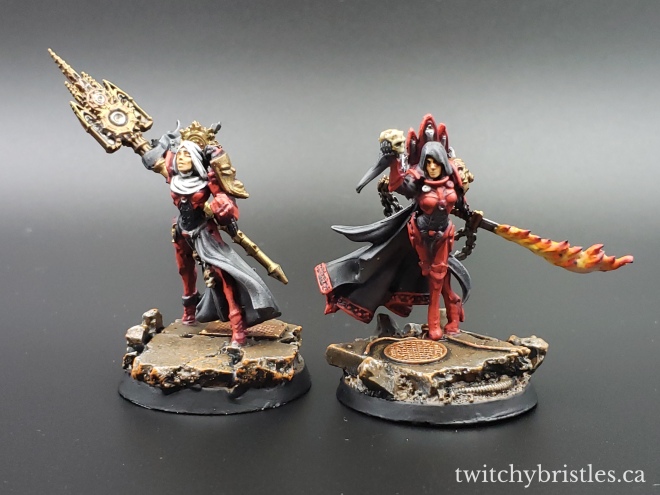 Wow. Just wow. Out of all the models that I’ve picked up from Raging Heroes, and I have picked up more than a few for my Adepta Sororitas army, these are definitely two of the best sculpts I’ve worked with so far in terms of their detail and just how distinct and good they look as characters. Standing in as my Imagifier is Sol-Sarya, Priestess of the Sun of Thorns (try saying that five times fast) and taking on the mantle of Canoness is Reyallia, Sanctifier of the First Legion. What blows my mind is that these aren’t even cutting-edge or especially recent Raging Heroes models, and they still look phenomenal. It makes me want to go and throw money I don’t have at some of their new stuff!

Both of these were relatively easy to build, and easier than when I’ve build Exemplars since they’re more of a monopose approach. I do like being able to pose plastic models, but for resin I find monopose is infinitely easier to work with. In terms of painting, both were relatively easy to work with despite the sometimes-ludicrous amount of detail on both of these sculpts, to the point where I had to kind of pick and choose what details I was going to bring up in the limited time I had to paint or work on these.

All things together I think these came together really well, and out of the most recent batch of Sisters I did they are my favorites by a wide margin. I will say that I think I need to improve a little on flame effects – I played with those on the Canoness, with the flaming chainsword being a thing and all, but I think I need to refine that if I’m going to do a flame effect on any larger a scale. I also may have to fix the Canoness’ shiny collar-buttons because only now, as I write this, do I look at the pictures and realize I left one of them unpainted. Oops.

If, rather than going with a full range of proxies for your army, you just want to pick up a neat-looking character or two I can’t say enough good things about these two. They stand apart from the rest of my army brilliantly and they’re going to look eye-catching and brilliant on the tabletop. I definitely have plans to keep going with this army once life stuff levels out, and once I have more normal and steady work. While I won’t make side-by-side comparisons with the new Adepta Sororitas by GW, I will say that I have not yet regretted my decision to go all-proxy or third-party with this army even a little since I started, and at this point I don’t think I will regret it later.

“Following the principle of the 7 Mothers, the Sisters of the Eternal Mercy used to be a religious order who fought among the stars to free humankind from all oppression.” – The Toughest Girls in the Galaxy, Raging Heroes.