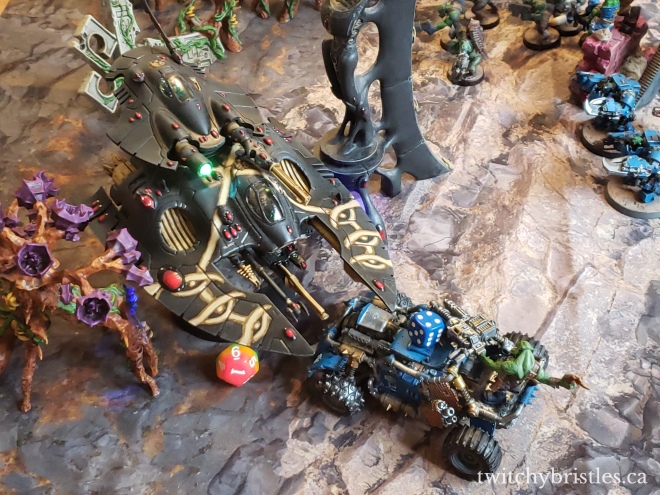 My friend Gerard was one of the first people I played Warhammer 40K with when I got into it, and I was thrilled recently to have him over to break in my new Deathworld Forest. My Eldar and his Orks have a long and ugly history and it was fantastic to see them back in a grudge match on a shiny new tabletop. Gerard brought fried chicken over from Mary Brown’s, and we spent the afternoon leafing through Crusade rules, talking Warhammer shop, and of course beating the unholy hell out of each other’s respective armies. This was what the kids call a “swingy” game, which in my opinion is what some of the best Warhammer 40K games are.

50-0. I had a lead of 50-0 by the time we got to the second turn of the game. I’d shredded through most of his boyz (astutely titled the Cunning Brutes and the Brutal C*nts), and because we were playing an Assassinate 25 PL game from the Core Book, I hit his Warlord, a Weirdboy with a striking resemblance to Captain America, with everything I had. The Warlord finally fell to my Howling Banshees, and I felt pretty confident that I’d have this by the end of the battle round. Boy, was I ever wrong about that.

The few Boyz that got through to my Dire Avengers and my Autarch annihilated them. My Falcon, which had been transporting my Howling Banshees into the fray and acting as heavy support, was tied down by a Boomdakka Snazzwagon, which proceeded to curb-stomp the larger and more points-costly vehicle. My Howling Banshees had to deal with the metal Meganobz that Gerard just recently finished, and despite the Eldar’s best efforts, the Meganobz went through them like their armor was made of tissue paper.

I made a strong, bold early play in this game to take out the Warlord – and it succeeded. But despite taking the objective I was thrashed and tabled by Gerard’s Orks, and naturally conceded the game after that. I’ve never thought that Orks were a faction to underestimate, and that’s even more true now that they have a new codex, new rules, and a new 5 toughness to work with. I can’t wait to see the rematch that comes out of this one, and I hope me and Gerard are able to get another game in soon.

The next game I played on the Deathworld Forest table was more a “practice” game or simulated game than anything else, since frankly I was playing both sides. It was a nice opportunity for some pictures though, and to get a better handle on driving my Death Guard and Eldar, which I’ve definitely struggled a little with lately on both fronts. This time I think I managed a better deployment for my Eldar, and this turned into another wonderfully “swingy” game. While Death Guard initially had a much better position and a much stronger hold on the center, the Eldar bounced back hard, especially thanks to the tag-team of Jain Zar and my Autarch.

In this “Seed Malignifier” mission from the Plague Purge book, the Eldar and Death Guard were fighting over the wreckage of a couple of Myphitic Blight-Haulers – presumably, the Death Guard wanted to salvage them and the Eldar wanted that not to happen. The Death Guard were ultimately driven back, and with the xp and requisition points gained from this match I might actually stand a fighting chance now against XenonMage’s Tyranids, since this was scored as part of that campaign. She’ll be out visiting next month, and I’m hoping that we can get a game or two in, though her Tyranids might be going up against the Death Guard because I want to see how she deals with Gorefield. But I’m very happy with getting some games in this month, and how the table and terrain turned out!

5 thoughts on “BatRep Double-Feature: Breaking in the Deathworld Forest!”