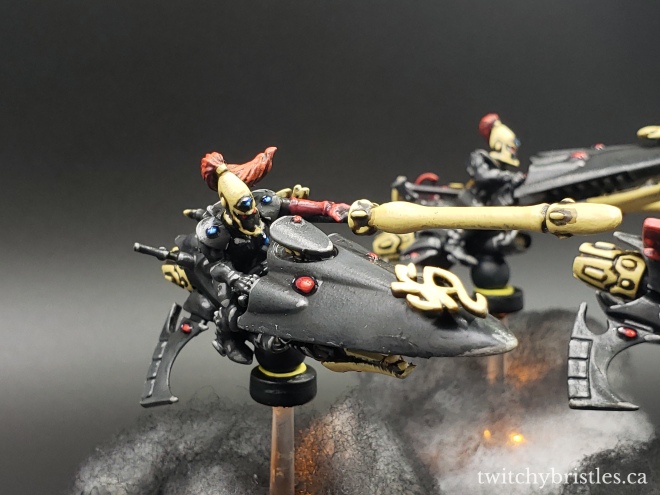 We all know that I have an unhealthy love of LEDs. Having not finished an LED project since upgrading my Fire Prism with maneuvering thrusters, I decided it was time to do something about that. Time and budget constraints lately meant that I had to be a lot more grounded and reasonable however about how I went about that. So, with some LED tea lights, a bag of cotton fill, a box of Eldar Jetbikes and a whole lot of 40k and Sigmar bits, I set to work. What I hoped to pull off was my own brand of Shining Spears, soaring over bits of their exploding vehicle quarries. In the end, I think I’m decently happy with what I pulled off!

These are definitely one of the trickier kitbashes I’ve made, in a way that’s totally self-inflicted. First, I decided instead of regular Guardians or actual Shining Spears that I wanted to use my Storm Guardian heads, and homage what has become one of my favorite Troops units for Eldar. I also wanted to stick with a more Guardian flavor because Guardians and Banshees have always been my army mainstays, and I’m a little saturated on Banshees at the moment. The lances were Bright Lance heavy weapon extras, with the arms taken from Age of Sigmar banner-carriers from the Daughters of Khaine line, and I threw some of the banners onto the jetbikes themselves as ornamentation.

Now, the fun parts – these models glow, thanks to modified tea lights with little explosion clouds, and they’re also poseable. Ages ago, when I refitted my Biel-Tan Falcon, I tried to use rotation magnets, with only mixed results. Those magnets, though, were the perfect size for something the weight of a jetbike, and as soon as I realized that I had to add that feature to the build. Having these not only light-up but poseable will mean hours of endless entertainment because I’m easily amused by shiny plastic toys. This time I even accounted for the painted magnets grinding against each other via some poster-tack between the ball and the base, which should keep the parts from chipping.

This is a project that took me a long time to finish (and may have put me a little behind on my Christmas painting) but I couldn’t be happier with the way that these turned out. I’m especially happy with Vyishnar, the squad leader in red, and the way that the explosions themselves ended up looking, especially in low-light. I can’t wait to drop them into a game against KinpatsuSamurai or XenonMage soon, so that I can finally have an Eldar unit on the tabletop with some real firepower behind it.