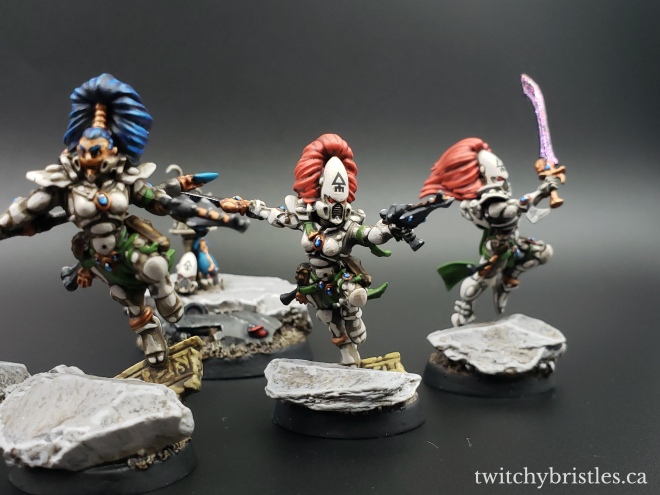 There’s a line I love from an old Youtube video: “The situation has been made worse with the addition of yet more bees!” I think we’re definitely reaching a point where we can say the same thing about the number of Howling Banshees in my army roster at any given time, but I remain unapologetic. Months ago I painted the new plastic Howling Banshee Exarch, and while trying to clear some of my “shame” pile I decided I wanted to paint the rest of the Banshees from the plastic kit. I’m thrilled with the end result, and with how these fit in with the rest of their sisters.

I think I might have mentioned about my Exarch when I painted her, but I found that the assembly of the Howling Banshees in plastic was a lot trickier than the older sculpts, but to give credit where it’s due – and I do believe it’s due – GW includes a whole lot of spare bits that I’ll be able to use in future kitbashing endeavours and projects. I also have to say that the sculpts are very crisp and very easy to work with from a painting perspective, even the basing “ruins” sections which were surprisingly easy to work with despite the small size of the lettering.

The smooth armor surfaces on these models were very easy to work with, even compared to some of the older metal sculpts. As much as I love my metal models, there’s a pretty clear difference between the old and new sculpts in quality, even if I’m not necessarily thrilled about the size-creep or scale-creep involved with some of the new models. I kept the painting of the four plastic Banshees more or less to my usual formula, making sure that they fit in as seamlessly as possible with Mura, and made sure to add real rocks to the bases so that they’re bottom-heavy and have enough weight that they still feel decently consistent with my metal ones.

I’m very happy with the end result, even if my Banshee collection is now pretty excessive. I still have not a single regret on that, though. One of these days I’m going to have to build a list or an army in Crusade specifically so that I can field all of these at once – with the changes they received in the new Aeldari codex, Banshees are a pretty nasty group to mess with. I still might not be used to the 9th codex rules, but I don’t see my emphasis on Guardians and Howling Banshees as the mainstay of my Eldar changing anytime soon.

4 thoughts on “The Addition of Yet More Howling Banshees”